February 5, 2020 4:00 P.M., Ministry of Transportation
KENORA — Today, Caroline Mulroney, Minister of Transportation, and Greg Rickford, Minister of Energy, Northern Development and Mines and Indigenous Affairs took further steps to deliver on the government’s commitment to widen and twin Highway 17 between Kenora and the Manitoba border by signing a Memorandum of Understanding with Niiwin Wendaanimok, a partnership of four First Nations with interests in the project area. Widening Highway 17 will reduce travel times through highway corridors, critical trade links and international gateways, while promoting economic development and safety.
Under the guidance of Elders from the four First Nations, the Ministers participated in a Manito Aki Inakonigaawin (Great Earth Law) ceremony with Ogichidaa Francis Kavanaugh, Chief Marilyn Sinclair, Washagamis Bay First Nation; Councillor Billy Wahpay, Shoal Lake 40 First Nation designate; Chief Chris Skead, Wauzhushk Onigum First Nation; and Chief Lorraine Cobiness, Niisaachewan Anishinaabe Nation. This memorandum of understanding will guide the relationship and the engagement processes for the project in the spirit of co-operation and collaboration.
“The signing of today’s agreement with Niiwin Wendaanimok is a key milestone for this important project,” said Minister Mulroney. “We are committed to maintaining a long-term working relationship with Indigenous communities in the Kenora area to ensure the successful completion of the project. We have a shared goal to create meaningful economic opportunities for local Indigenous communities and build better transportation in Northern Ontario.”
“Today, we are one step closer to twinning Highway 17 and improving road safety for the people of Kenora-Rainy River,” said Minister Rickford. “Twinning Highway 17 is a top priority for our government and I am proud to announce that significant progress is being made. Today’s signing ceremony with the Four Winds Group marks an important milestone in the project, and we have a clear path forward to completion.”
The agreement on a collaborative relationship and process is an important and timely step for the Highway 17 project and a critical part of the province’s continued inclusive and respectful consultation with First Nation communities. Ontario remains committed to targeting shovels in the ground on section 1 of the project by summer 2020, while taking the time to hear and address any affected rights and interests and mitigate impacts related to the project.
Widening Highway 17 is part of the government’s plan to build safer and better highways to get people and goods moving.

Quotes
“From time immemorial, resource-sharing in our territory has been guided by Manito Aki Inakonigaawin – our Great Earth Law. When we follow this path and its protocols, wise, fair and sustainable decisions are made for both the land and the people …for all the people who share these lands. Our collaboration with MTO is already showing the practical effectiveness of harmonizing Anishinaabe and western ways. So much more can get done –and faster –when we combine our strengths!” – Chief Chris Skead, Wauzhushk Onigum First Nation
“Everyone wants good, safe roads but, in the past, Ontario’s roads and highways have damaged our resources, our sacred places and marginalized our people. We’re hopeful that the path of partnership that we’re committing to walk with Ontario will, in fact, lead us to the Minister’s promise of meaningful economic opportunities for our people. We know that, given the chance, we have a lot to contribute.” – Councillor Billy Wahpay, Shoal Lake 40 First Nation
“Since the announcement of this project, our Nation has been engaged with Ontario to work towards creating a partnership that respects our treaty relationship with the Crown, and the incumbent duties and responsibilities of both parties. Our Nation recognizes the province’s priorities of this project, and we continue to work with the province towards the project meeting our Nation’s priorities of meaningful economic development and respect for the treaty relationship.” – Chief Gerald Lewis, Iskatewizaagegan #39 Independent First Nation

Time to take note of the great work on the Poplar Bay Road.

After the lifting of load limits on roads on June 1, work began in earnest to augment the road with gravel and chips, dust suppressant and grading. 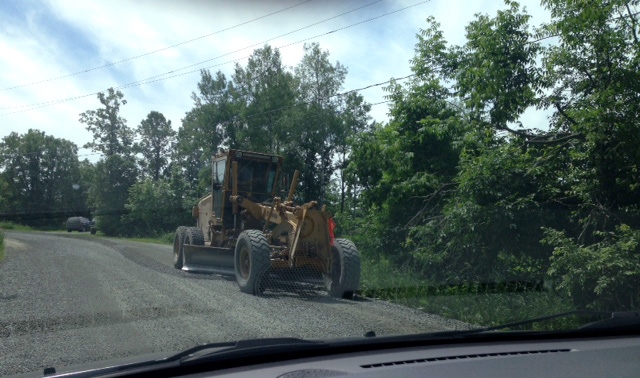 Here are a few interesting stats – since June 1, on the main Poplar Road from pavement to the green gate at the southern tip of the road, 99 truckloads or 2100 tons of material were applied to road and then dust suppressant was applied with grading.  SERA alone applied 26,500 litres of calcium chloride south of the South Poplar turn off!

Thanks goes to the road committee led by Ken Bracken who worked diligently to plan the work, get the contractors lined up and the work done.  Any comments from you to the committee can be sent to our contact page on the web site. 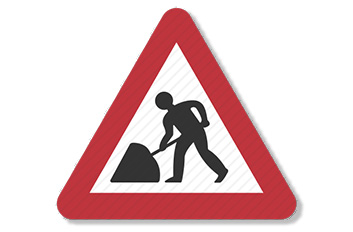 With the seasonal weight restrictions removed road work has begun! With over 100 loads of gravel being laid down and spread across the roads. Please be aware and be cautious around the belly dump trucks, while they are dumping and travelling down the roads. Please slow down when driving over freshly laid gravel to avoid flying rocks and damage to your tires. This work is anticipated to last 2-3 weeks in June.
Once the gravel has all been laid down and graded, we will have dust suppression applied by the end of June! 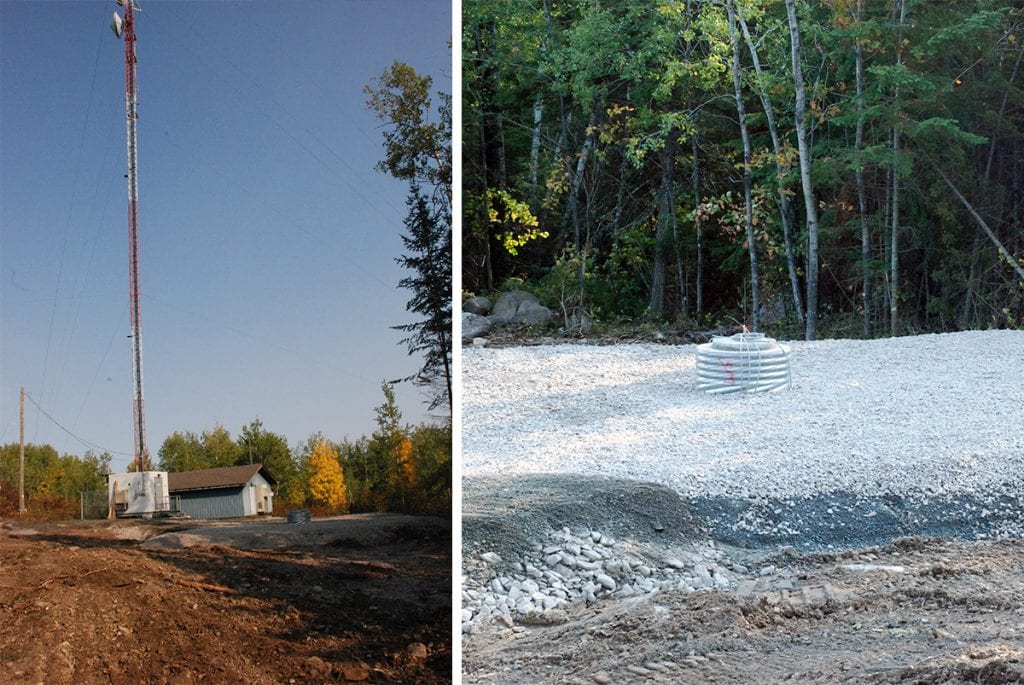 Bell Canada is now upgrading the microwave and cell tower on the Manitou Road.

The exiting tower will be replaced by a new tower that is roughly 16 feet taller than the exiting tower and will carry all the new cell technologies included expanded frequencies and increased capacity on weekends for all of us weekend warriors.  Upgrades to the wireline technologies is unclear, but apparently some areas are receiving digital access via the phone lines.

The new tower will be up and running by December local contractors commented to Manitou Road residents.  Expect significant contractor traffic on the main Poplar Bay road and the Manitou Road seven days a week. Today, there are eight foot cut logs available for anyone.  Approach the contractors on site as soon as possible.

Just came in from Winnipeg. The main road is magnificent! Please pass on my comments to the rest of the SERA Board. Well planned and executed work. Worth every penny.

If you have any beefs or bouquets, be sure to let us know through the contact us page!

In April, SERA and WBCA signed a Memorandum of Understanding (MOU) whereby each party agrees to share maintenance and capital upgrade costs equally on the main road, defined as the end of the pavement to the south loop of South Poplar Rd.

In addition, both parties agreed to work together to budget and plan roadwork each year by means of collaboration between road management committees from each association. SERA’s representatives are Ian (Skip) Hendry and Peter Murdock.

This year each association will contribute $20,000 to capital projects over and above expenditures for ongoing maintenance, which is comprised of grading, snow removal, shoulder weed whacking, culvert steaming and dust suppressant.

The $40,000 capital plan this year includes $10,000 in new chips through the reserve community and improvements to drainage in three problem road areas: 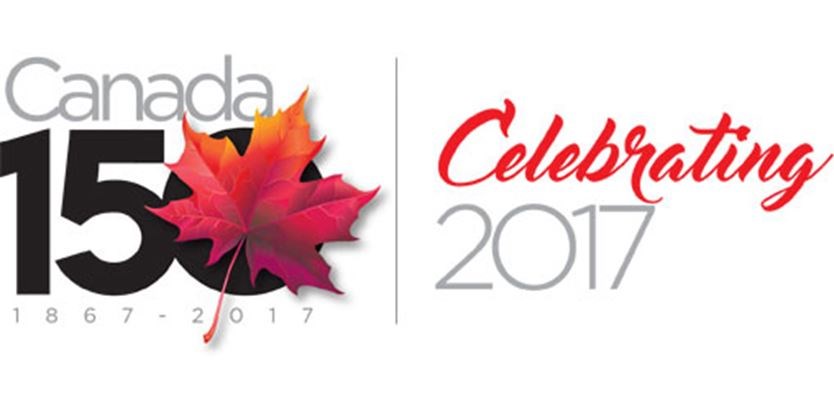 Thanks to Ian Hendry, Jim Fadden, Roy Sherbo and Peter Murdock for their efforts to date!!! 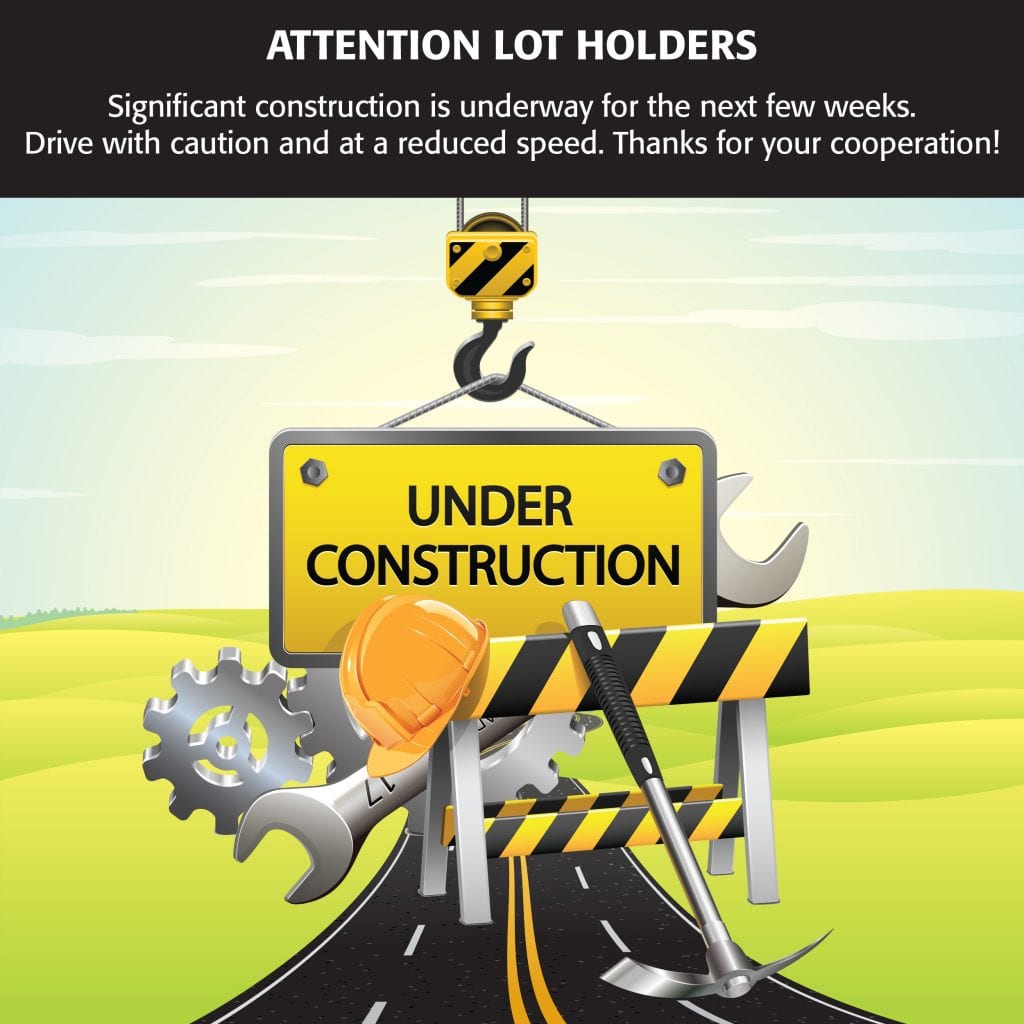 Significant road construction underway for the next few weeks. Drive with caution and at a reduced speed.
Thanks for your cooperation!

Emcon grader undertaking a full grade from the pavement to the Green. Thanks to Warren the operator for the great job.

We’ve come a long way since starting this major rehabilitation project. To demonstrate, we’ve attached some photos and a video to show what the road was like before and during construction.
BEFORE ROAD CONSTRUCTION
AFTER ROAD CONSTRUCTION
SPRING 2017 MAINTENANCE
A lot of money has been spent ditching and installing new culverts to insure the water is running away from the road. A good road is dependant upon good drainage. We still have many areas where ditching is required. Unfortunately funding is limited and the work must be prioritized.
We had major issues with a frozen culvert that had to be steamed open several times in an area that had never been an issue in the past. We had ice and water more that a foot thick over the road.
[layerslider id=”6″]
Scroll to Top